What is Sotol you ask? My mother thinks it tastes like fermented rope, but it is actually a liquor distilled from the Dasylirion wheeleri (also called Desert Spoon) plant common to the Chihuahuan desert. I have heard it referred to as “Tequila’s Northern Cousin” and it is beginning to gain a following in trendy Texan bars. Due to the holidays I find myself back in my childhood home which is just one mile north of the state of Chihuahua where the stuff is most widely produced. I personally don’t mind the taste which I would describe as grassy and a little smoky, but it is definately not for everyone.  My parents were given a bottle and it has been sitting in the kitchen collecting dust as no one seems to know what to do with it. 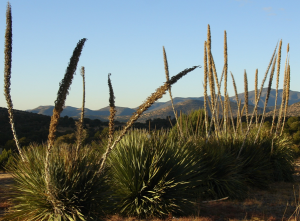 As I was standing outisde on a cold and windy desert evening watching one of those incredible West Texas sunsets and wishing it was not so damn cold the idea struck me: I should use the Sotol in a Canelazo!! I discovered this mulled cocktail on a trip to Quito where the weather seems to go from pleasant to freezing in a matter of minutes (similar to here in the winter). Quito is a beautiful colonial city with great food and even better hospitality, but the altitude and cold can really get to you. The upside of the altitude is that one delicious (and cheap!) Canelazo bought on the street will warm you up and give you a delightful little buzz. It is traditionally made with aguardiente (fire water) which refers to any strong alcohol and varies from country to country, but in Ecuador it is distilled from sugarcane. I figure the use of Sotol shouldn’t be too much of an issue as sugar, cinnamon and cloves makes everything taste delicious.

What you will need:
6 cups of water
8 cinnamon sticks
Cloves to taste (I go light)
1 cup sugar or grated panela (I am using piloncillo)
Liquor to taste (Rum would probably be good if you don’t have aguardiente or Sotol)

Directions:
1. Combine all the ingredients, except for the booze, in a medium sized pot. If you are using panela/piloncillo be sure to grate it first.
2. Bring to a boil, reduce the heat and simmer for 30-40 minutes (You could just boil it for 15-20 minutes, but I find having a little patience makes all the difference).
3. Mix in the booze of your choice and serve hot.

Success!! It tastes nearly identical to what I had in Quito, but with an extra kick. This stuff is strong and I tend to be a bit heavy handed so be careful. I will admit that grating the piloncillo is a bit of a hassle especially is you have a crappy grater, but I think it tastes much better (and is supposedly healthier, but eh…it’s still sugar) than table sugar. This would be a great thing to take to a winter potluck and I bet adding  in some orange rinds would make it even tastier.